Cartography for the New Millennium 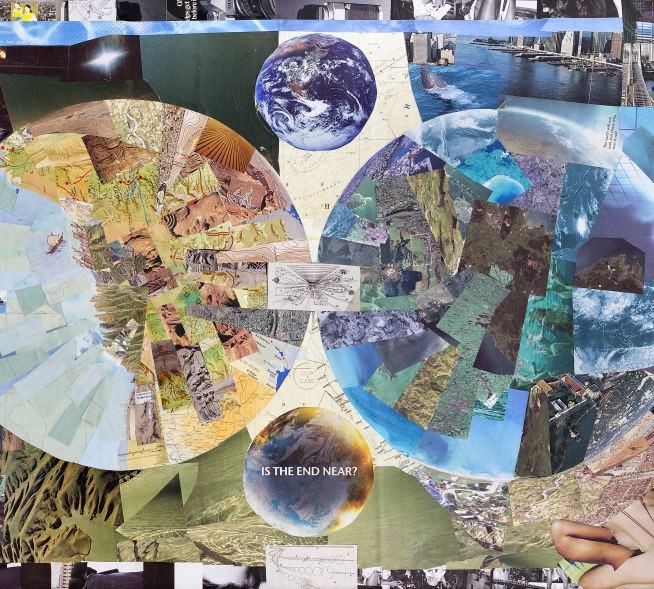 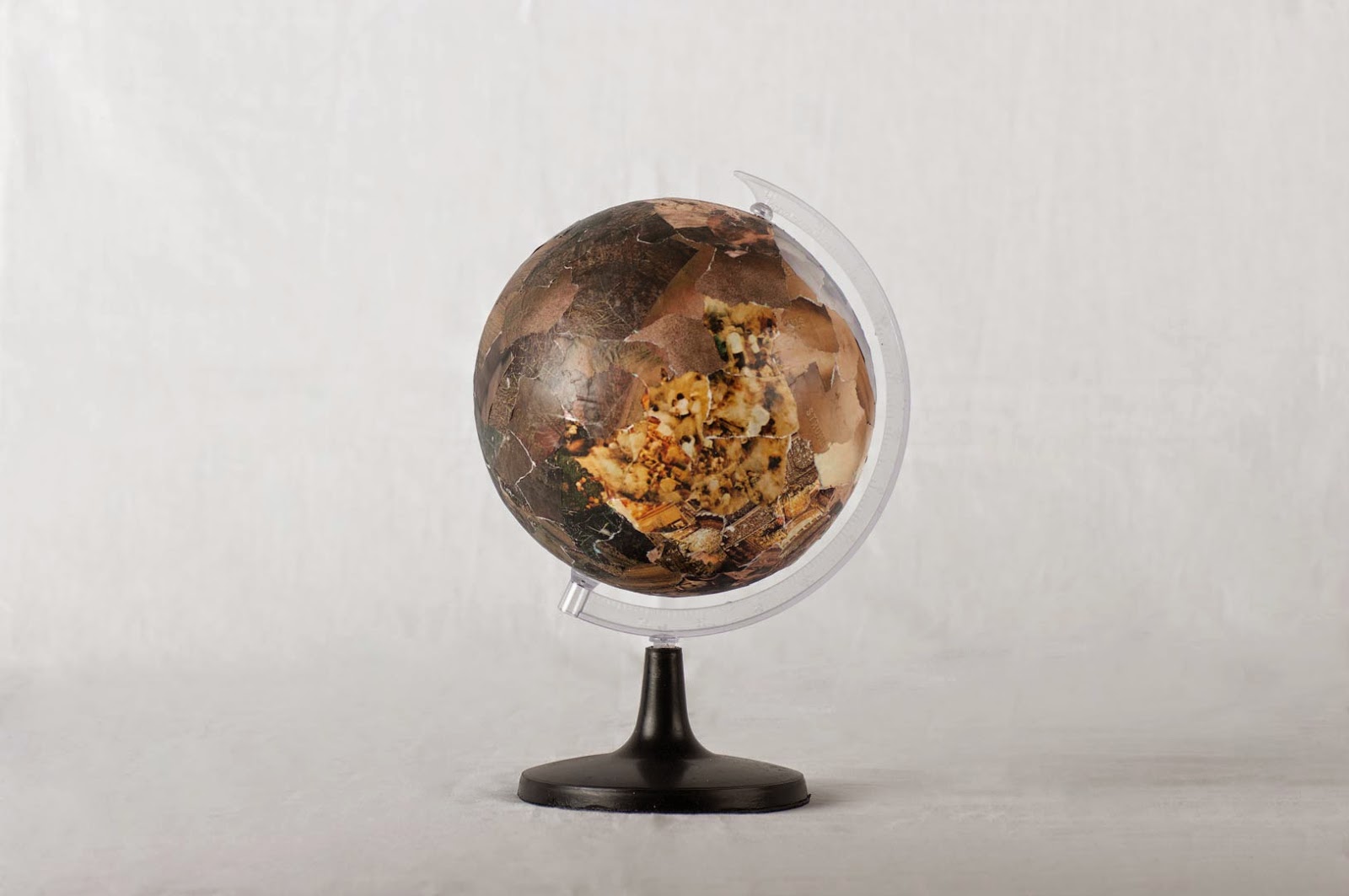 To cut or to rip:
Michael Ferriss's
Cartography for the New Millennium


What kind of maps are adequate for the new millennium? And what kind of map-making? We are 1.4% of the way in and the maps we currently have do not so much orientate us as locate us: navigation is automatic as long as we know where we are going. Current map-making separates the functions of navigation and location. The surface of the earth is available to us on our screens at a distance so great as to be abstract and at a proximity so close as to be a forced intimacy. 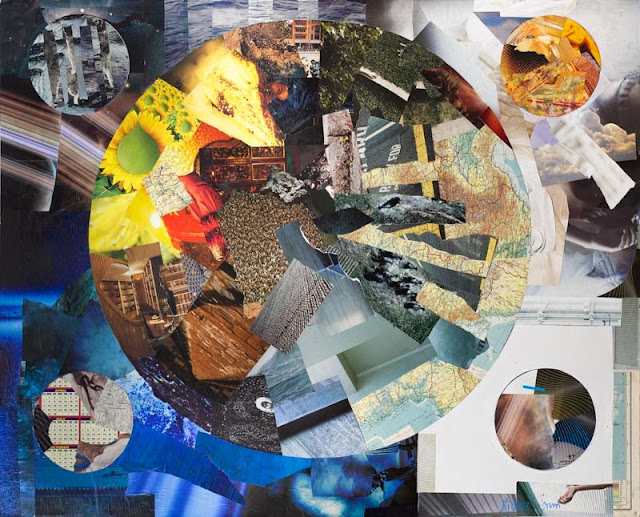 
These of course are still frames. But then the features in maps we used to need to steer by did not used to require constant updating, so that the promise of real-time accuracy might seem to have less to do with a geographic than with a temporal mapping. The time-scale might seem to have taken priority over the space scale, however using the maps we have what is hardest to grasp is exactly where we are in time. Where spatial distances have collapsed and the middle distance like the middle class is in the process of disappearing - recuperable only in old media, on TV, in books, on paper: where it is less a problem of perpetuating values than of preserving the record of their passing - distances in time have exploded. A thousand years has become impossible to conceive of let alone map. The temporal horizon itself has receded beyond the reach of any map. There are people who offer as the reason for this evacuation of time the observation that we are in constant movement: time is an issue as long as we arrive where we are going in time; and generally knowing where we are is more important to us than knowing how we get there. We have the maps we deserve.


Michael Ferriss's Cartography for the New Millennium succeeds in giving us what we do not need: maps that are for a thousand years, with or without us, different maps that are not just the old ones made differently, or the new ones made better. His cartography also gives us whether we need it or not a different way of making maps.

The second difference, that residing in the method of the maps' production, provides us with clues as to how to deal with the first difference, which raises the problem of interpretation. We are at a disadvantage given that navigating onscreen maps no longer requires interpretation: since locative data has already been read and, literally, screened by the time we see them, our reading of the signs on screen is redundant and the interpretation that would parse directions from them unnecessary. Confronting then "When We Made Love for the First Time" entails calling on memories of how we did it - in a clearly double sense. In fact, memory would seem to be the most clearly operative zone to call on facing works that are collages of old magazine images, some with electronic componentry stuck on, some remembering painting by brush, others formally recalling atlas images, maps of course, and idealised globes. Memory applied to the map should tell us where we were "When We Made Love for the First Time" or where to "Catch Tomorrow" or where "Beyond Love" in "No Man's Land"? to take several titles at random. 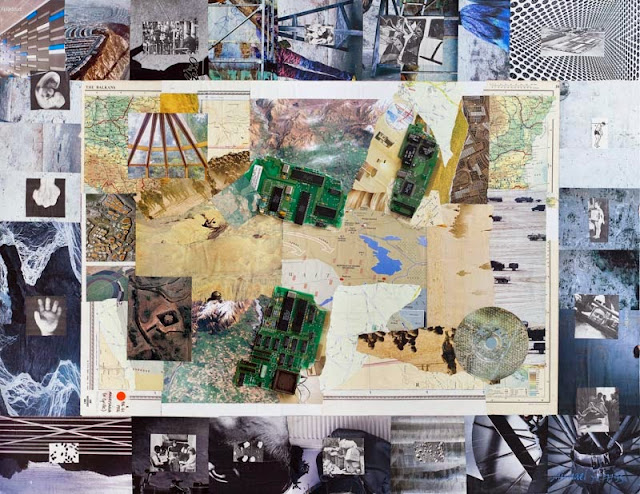 
But there is as clearly a progression that belies any use we may make of memory, taking us out of the zone of its particularities of place and specificities of experience, yet for that neither unspecific nor not particular. "Truth and Other Enigmas" places us but in a kind of enlightened futurity, as if it is our destiny to discover that the truth is one enigma among others and that this is our destination. 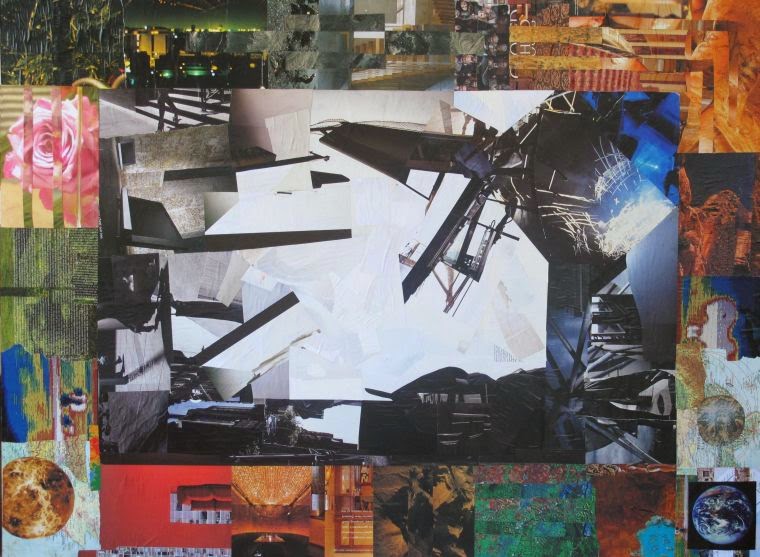 
While "Rose of Yesterday" directs us to a memory we cannot place: was there one? A red rose takes up the entirety of a globe. But it is also a satellite view, rendering the rose a rosa mundi that could hardly have been forgotten since it is that rose of that yesterday that belongs to everyone indifferently, depicted from the eye of space, a machine eye which is also the eye of an antiquity that never was, like a closed circuit excluding exactly human memory. 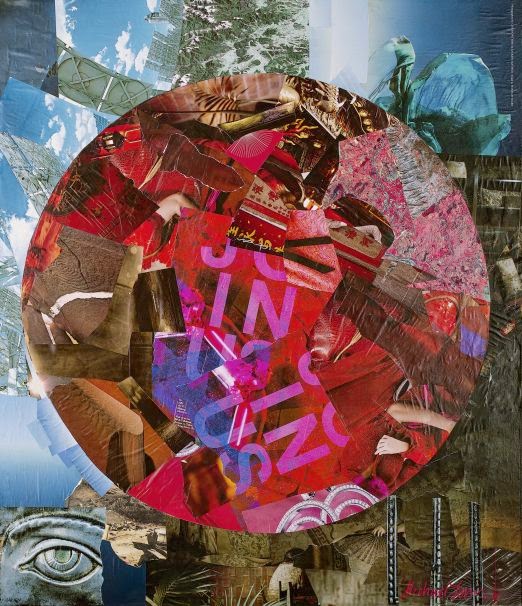 The solidity of the "Mappa Mundi I" - already serialised, however - succeeds in a further dislocation, pictorially dismembering what could be the memory we reserve of human bodies to ask if the end is near. 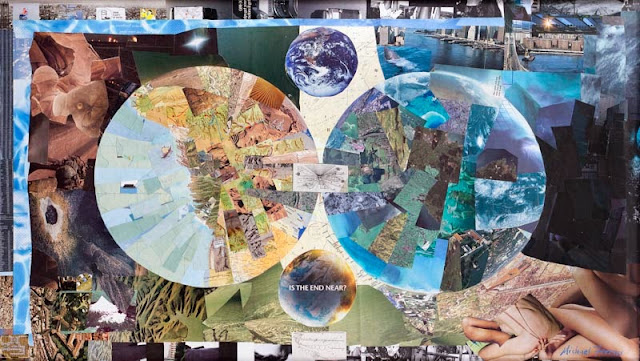 It has been preceded by an "Aftermath" dense with allusion to heating and cooling and "Catch Tomorrow" possesses the nostalgia of a naïve futurism - before a critical global juncture, impersonal for being global: that is, affecting all map-making. Is the exhibition taken as a whole an apocalyptic cartography - a series of maps towards disaster and human annihilation? The judgement would be impersonal. Hardly what we deserve but ordered. 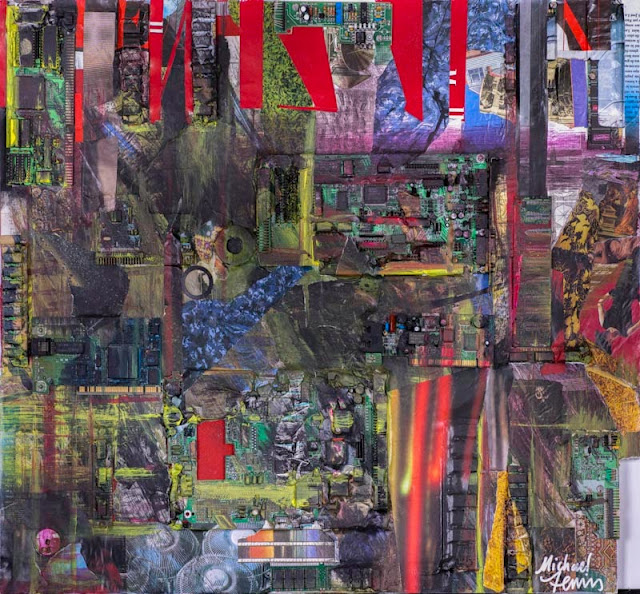 This is the question of the "Antithesis of Chaos." A shape like a tongue-depresser holds down a desert plateau that also resembles flesh, but a new flesh into which intervene several electronic components. Four icons, at the corners, promote the idea that the image is given by instrumentation, a coordinationof devices including definitive evidence of memorial operations in a piece of street map reduced to aesthetic elements of colour and shape, torn, that is, from context, and a shadow figure, once more of an antiquity that never existed and a futurity that will never be, although the figure seems to say so, transhuman. The bird-headed figure is anyway a shadow among shades. The work provides a timetable and assembles the news as if offering that there will be some in a time to come. The act is not concessionary. 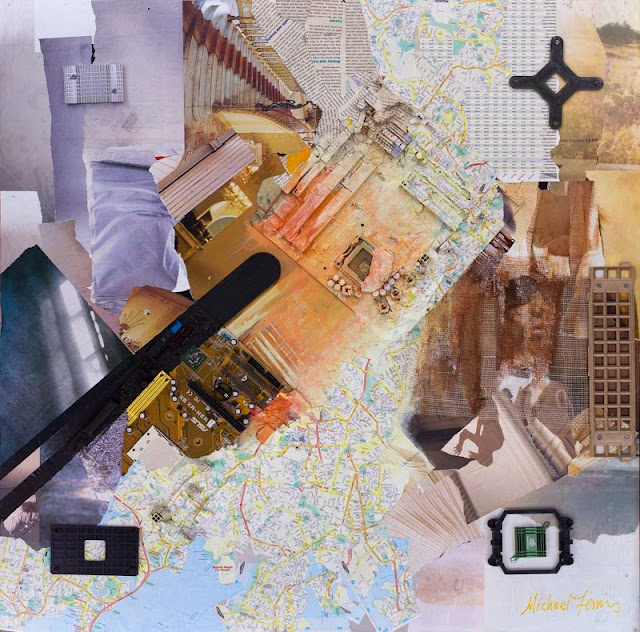 Almost the most personal work advances the thesis of a new horizon: "Acoustic Horizon II" - here the 1980s are again progressive... as they were? The collage is preeminently visual but seems to say, Listen! It crosses time-zones with a longitude and the condition of desire, want not need. It contains hair and classicism, lightning, beauty and stripes, and it heads off in several determinate directions at once. Hardly immediately, but beyond this horizon, an echo, impression or reflection, on an earlier "Acoustic Horizon I" divides rather than binds together the two works: where in "II" cuts predominate as the means to get from fragment to fragment, soft tears dominate "I" - the acoustic implications will be clear. "I" prepares a plane of passive modulation for the hard transitions of its successor in the series; "II" is the question and "I" the answer; or "I" the soft mould, "II" the definite form. 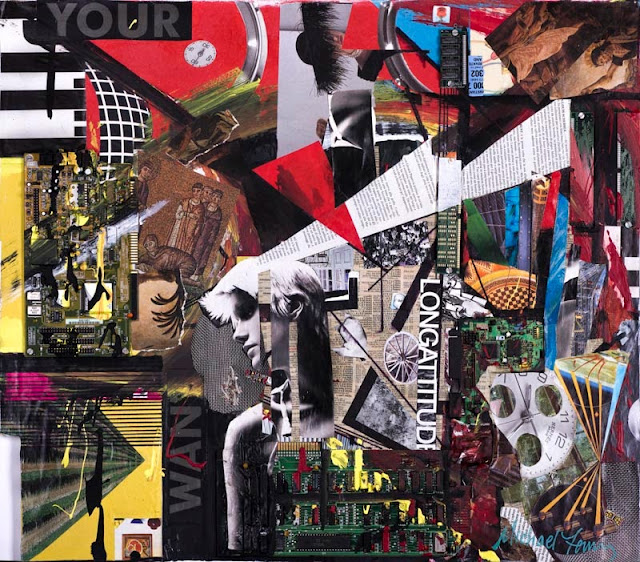 "Beyond Love" brings the sense of a division between these horizons into greater relief by working out and harmonising around a certain tonal centre of "Acoustic Horizon II" in a composition of both angles and eyes and hair. In "Beyond Love" the zig-zag of "Acoustic Horizon II" explodes and we are inside its angular plane, and here we at once see eyelashes, curls, both those involutions of writing and those orbits that revolve in and on bodies, and at the outermost, beyond this vertical harmony of a linear geometry with an organicism of curves, we are being looked at, not listened to but watched. "Beyond Love" attests to an horizon along which we are held in the regard of pure colour. 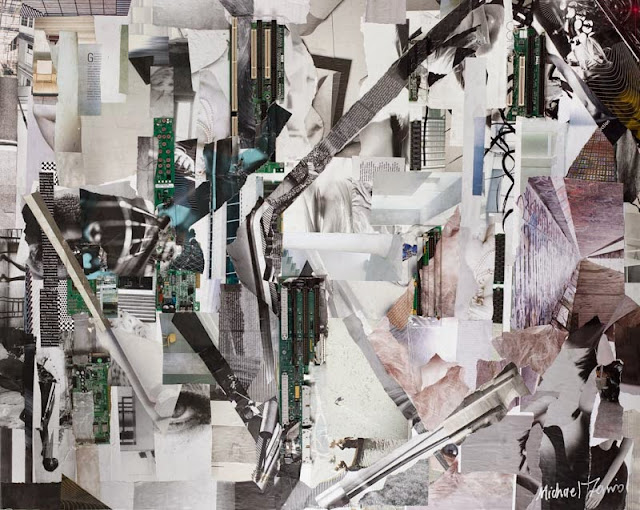 It is another work that will be decisive in articulating what this colour is fixing its gaze on us, the work called tautologically "The Aleph I". The title is tautological because as Borges informs us, the Aleph is the Singularity: "the only place on earth where all places are - seen from every angle, each standing clear, without any confusion or blending." Michael Ferriss's Aleph is however a single transparent sphere suspended against a background of acts of life and death. Did he intend another in the series? 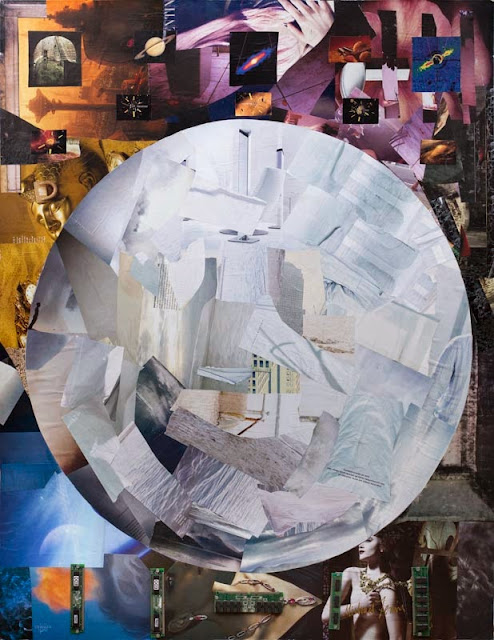 The fact that no successor appears in the exhibition calls attention to a similar sort of serial division we observe in "Acoustic Horizons I & II" - and that we are observed by in "Beyond Love" - by making a play of serialisation: "I" as simply means as cardinal the ordinal, as much as "one of," the "one." "The Aleph I" presents, as it should, in microcosm the several lines of enquiry we have been pursuing: the problem of a Cartography for the New Millennium - how are these collage works maps? If it is to global catastrophe they are directing us, do we deserve this, or them? And, is another horizon possible? one on which the globe that suffers catastrophe bringing human life to an end is not the only one, but "one of"? "Aleph I"? or, a "Beyond Love"? Because this would be the question in the eyes of the latter work and the reason it fixes its attention on us. What then about the colour? A loose end? The colour of the questionable singularity of "Aleph I" is the transparency of the medium: Michael Ferriss has staged a reversal by clarification - collage, the most colourful of media, is made clear, see-through. 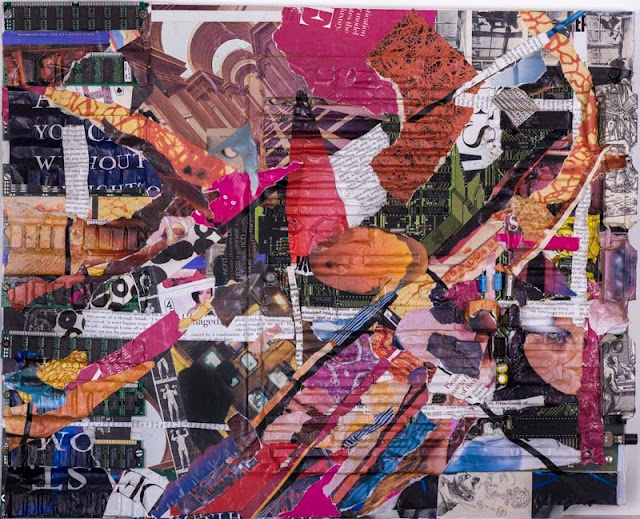 A final question remains to be addressed: if the judgement of planetary death is an impersonal one, who has imposed it? On whose order? And whose order ordered this order? The question recedes down corridors. It waits outside rooms with numbers and rooms without numbers, the same room, multiplied infinitely. 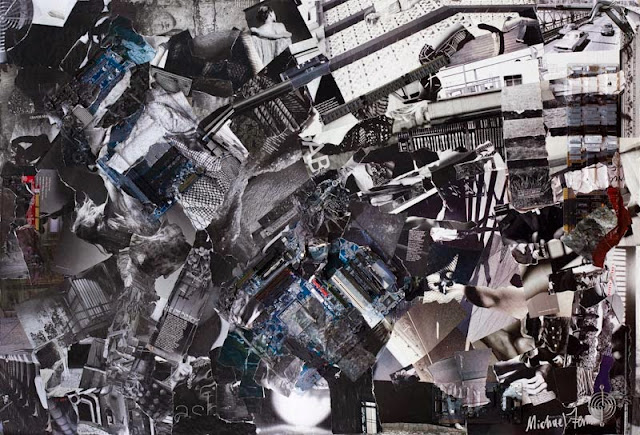 It walks the labyrinths of buildings whose insides are impossibly enlarged to hold countless people in numberless offices deciding the fate of still more people, of every one as of everyone. 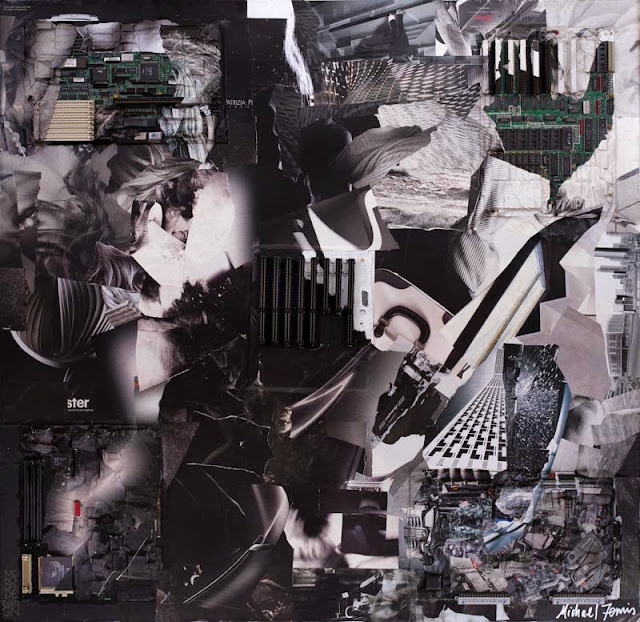 Its footsteps echo under striplight on linoleum now on carpet engineered to absorb the echoes under lights designed to be invisible: corridors where power has decided to absorb echoes and render invisible the acoustic agents causing them, cancelling feet, hands, mouths, in a single ganzfeld of translucent silence, under a total eye. The answer, that is, is given in the "Beamtenherrschaft" series, "I, II & III", bureaucracies that for being multiplied can only ever be one and have one body, corpocracy. 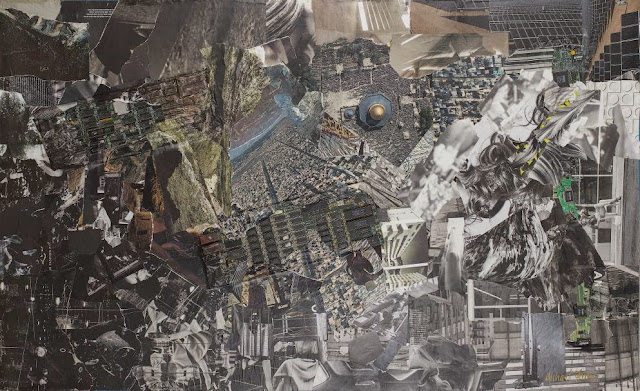 Is this the final question, this solution? Or is rather the question, the most important question, and wasn't it always, that question which resides in the method of these maps' production: To cut or to rip? 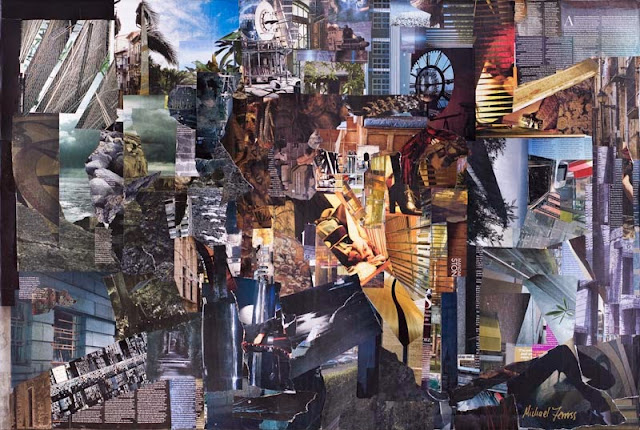 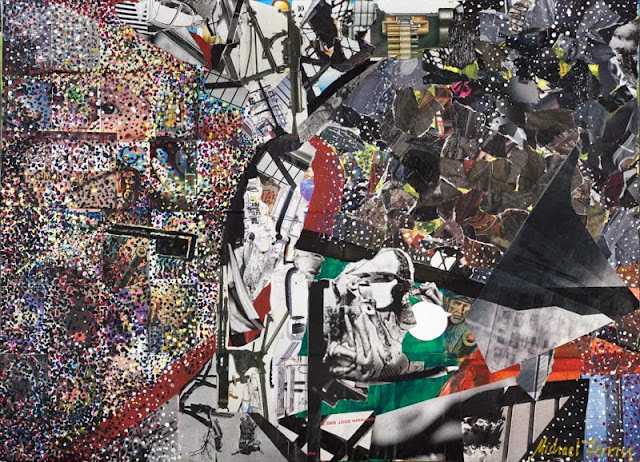 
Cartography for the New Millennium is an exhibition of collage and mixed media pictures by Michael Ferriss.


To Cut or To Rip is by Simon Taylor. 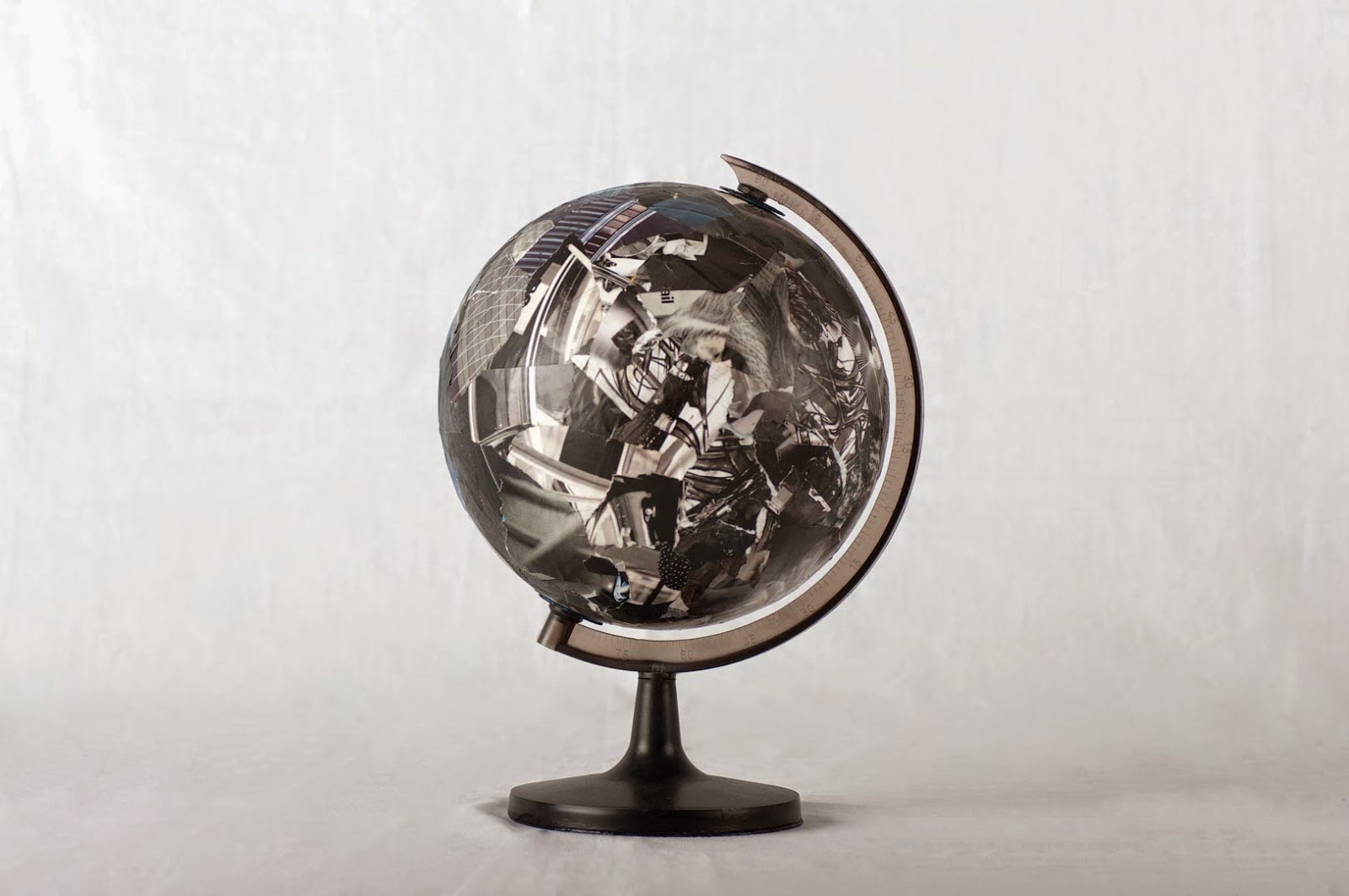 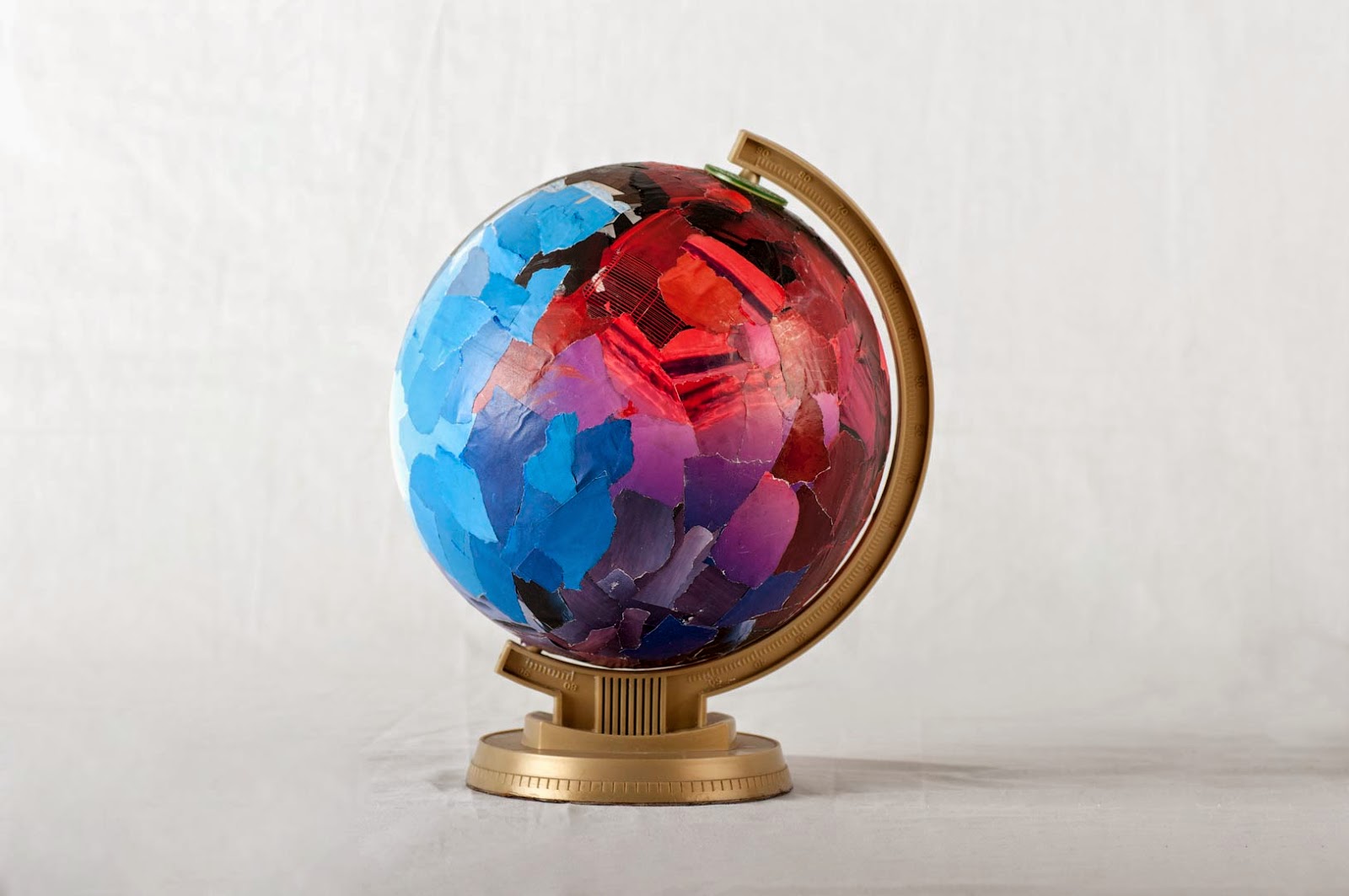